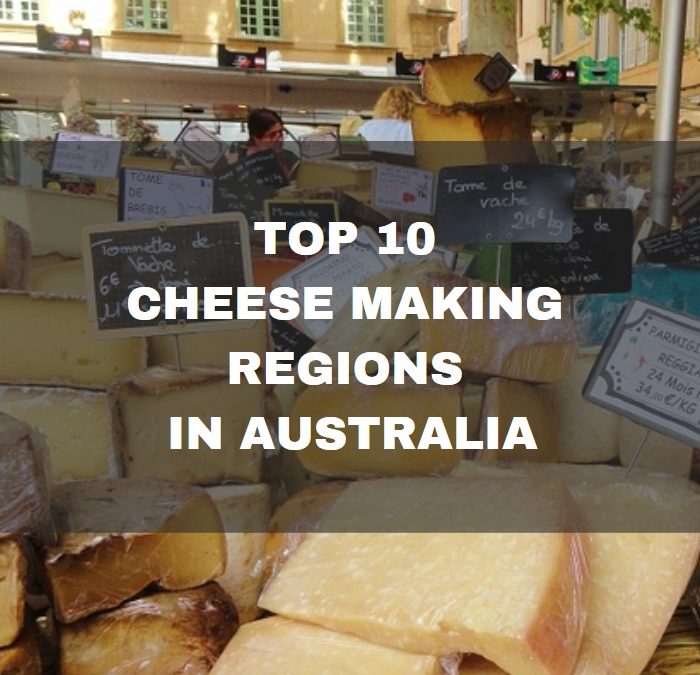 Cheese is a big industry in Australia. According to Dairy Australia, every Australian consumes an average of 14 kg of cheese per year. That’s a lot of cheese! Because of its high demand, the country produces about 344,000 tons of cheese in different varieties. Australia produces some of the best cheeses in the world, and if you’re looking for the best types of cheese from the land down under, these top 10 cheese making regions are a must visit for locals and tourists alike.

This region has around 1400 farms producing 1.9 billion liters of milk annually. Most of these come from cows. According to Taste Atlas, one of the most popular cheese in Gippsland is the 8 to 10 week- aged Gippsland Blue, a cheese made in the style of Gorgonzola Dolce.

The Southwestern Victoria region has lush pastures sustaining the water buffalo dairy farm in the region. The cheeses from Southwestern Victoria bagged awards in four categories during the 2017 Australian Grand Dairy Awards, so you can be sure that the cheese from this area is truly delectable and distinct. Aside from cheese, the region is also a main producer of yogurt and curd.

The Murray River irrigates this region, making its soil fertile. Because of this, many small to medium-sized farms and cheese processing facilities are found in the region. You’ll also find a variety of gourmet cheese in the area, proudly produced by artisan cheese makers.

Melbourne is dotted with artisan cheese makers offering fine handcrafted cheeses like That’s Amore and Diavoletti. Aside from cheese, Melbourne is also widely known for its stunning food culture.

The rich and fertile pastures and clean air of Tasmania is home to many dairy cows. In the 1800s, the first commercial cheese making company opened in the area. Currently, local cheese production continues to expand in the region. One of the most well-known cheeses in the region is the handcrafted raclette.

King Island, located 80 km northwest of the Tasmanian mainland, made a name for itself because of its specialty cheeses. There are 14 local farms in the region which supplies 2,000 tons of cheese every year. Some of the most well-known cheese in King Island are the Black Label Double Brie and the Roaring Forties Blue Cheese.

Atherton Tableland is located in the subtropical region of the country. It has a warmer and more humid climate compared to the other cheese making regions in Australia. Even if the area regularly faces flooding, cyclones and droughts, which poses an enormous challenge to farmers in maintaining milk and cheese production, Atherton Tableland still produces 547 million liters of cow’s milk a year. There are also many artisan cheese makers in the area, contributing to many delectable and unique cheeses of the region.

Bega Valley Shire is a historic town well known for its cheese making heritage. Bega cheese, the leading Australian dairy and food company, serves as the Shire’s biggest employer. Tourists can get a glimpse of the region’s first dairy farms and the journey towards modern cheese making at the Bega Heritage Center.

The south-western corner of Western Australia has 65,000 dairy cows producing 3.5 percent of the country’s milk. In fact, there are more cows than people in the regions.  There are also 150 farms spread over the lush and green pastures of south-western Australia. These farms provide milk for local creameries and cheese makers.