How to Get Rid of Cheese Moulds? 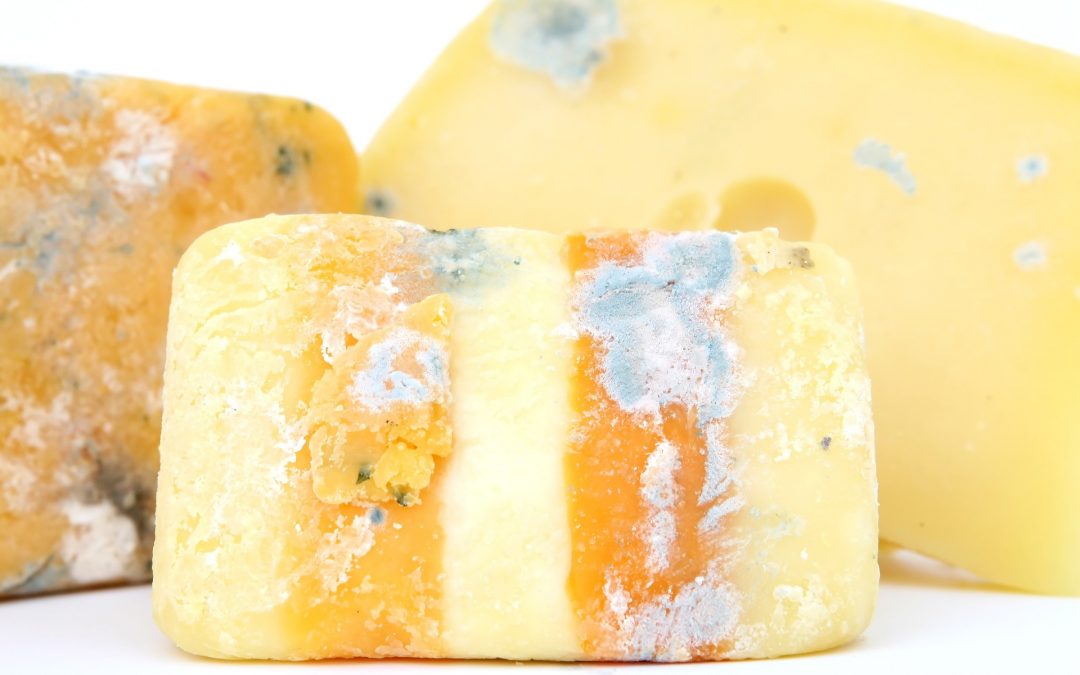 Cheese is a popular dairy product. It is delicious and we often pair it with our dishes to enhance its taste and flavour.

The common question is, “how long does cheese last?” You may have bought cheese to use it for preparing meals and snacks. You might have wrapped it, stored in the fridge, and seen moulds on it.

Well, moulds can grow in all types of foods, including cheese. Moulds are microscopic fungi that grow in warm and moist conditions. They grow from tiny spores and feed themselves by producing chemicals, causing the food to break down and rot.

If you are noticing fuzzy spots in your cheese, you may start to wonder if it is still safe to eat. Some moulds are helpful for mould-ripened cheeses such as Blue cheeses like Stilton, Roquefort, and Gorgonzola and soft-ripened cheeses like Camembert, St. André, and Brie.

Other types of cheese that have moulds are undesirable and can be harmful to your health. They can spread to the cheese and contaminate it. Worst is, the moulds can attract harmful bacteria such as E. coli, listeria, and salmonella.

What can you do if the cheese has moulds?

You may opt to throw your cheese if you see moulds on it but there are ways to redeem it. However, if it’s a soft cheese like ricotta, cream cheese, and cottage cheese, it is better to dispose them. This is because the moulds can quickly penetrate throughout the cheese. Semi-soft and hard cheeses are such as Parmesan, Cheddar, and Swiss are harder to penetrate.

You can save this type of cheese by following these simple steps:

You can cut away the mouldy part of the cheese with a sharp knife or cheese knife. Just make sure that the knife is safe and clean so that it will not contaminate the other parts of the cheese.

Slice at least one inch around and below the mouldy spot. Yes, you are losing some part of the cheese but it’s the best way to prevent the mould growth that will eventually damage the entire cheese.

If you see the mould is not that big and affects only a small area of the cheese, you can just scrape it off. Moulds can grow after just a week in the fridge. Keeping an eye on your cheese regularly to see if it is still in good condition can save your cheese from contamination.

There are times that the cheese looks good like there’s no problem with it. But don’t let the appearance fool you. Judge the cheese not according to sight but to smell and taste. If the cheese smells awful, it’s time to throw it away. Don’t take the risk of eating it because you might get an upset stomach or worse, you’ll get allergic reactions, respiratory problems, and get hospitalized.

How to Store Cheese to Prevent Mould

Here are some quick tips to keep your cheese fresh.

Wrapping the cheese in plastic is the most common mistake people make when storing their cheese. Cheese is unlike other food that you can just throw into the fridge. Cheese is a living thing and it needs air to breathe. Wrapping it in cellophane or bags suffocates its flavor and builds too much moisture.

Ammonia is a natural by-product emitted from cheese and most cheeses develop undesirable flavours if it is not released. If you wrap your cheese too tightly, it will not have enough room to breathe and smell like ammonia. The cheese will dry out and come out bad which you may not want.

Cheese wrap or parchment paper is best for storing cheese. Cover the cheese with a wax paper loosely and place it in a plastic container with a lid. When you open the cheese to cut and use it, make sure that you replace it with a new cheese paper. The reason is, the cut surfaces may dry out. To keep your cheese fresh and last longer, rewrap it and maintain a natural balance of humidity.

Cheese Aging Process Common Cheesemaking Problems and how to Solve Them